Bibliophiles, this one is for you. 84 Charing Cross Road is the spare yet remarkable collection of correspondence between American writer Helene Hanff and British bookseller Frank P. Doel, an employee of Marks & Co., Booksellers, located at (you guessed it) 84, Charing Cross Road, London. 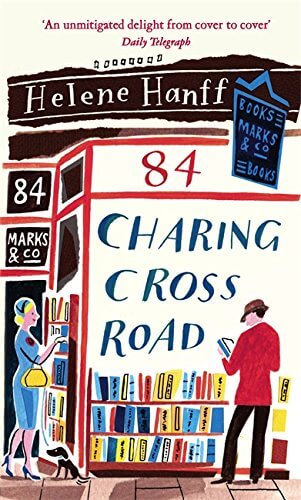 I say the collection is spare, but this is a compliment. In less than 97 pages, these letters, beginning on October 5, 1949, and ending twenty years later in October 1969, paint a profound portrait of politics, culture, friendship, and urban struggle on both sides of the Atlantic.

We sympathize as the employees of Marks & Co. scrape by for years on food rations and feel deeply their gratitude at the gifts of fresh eggs, tinned meat and nylons that Hanff sends to them from abroad. We hear first-hand about the king's unexpected death and the coronation of the queen. Children grow, buildings fall and friends lose touch.

Correspondence that will make you sob

All of these events are keenly observed by Hanff and come to life vividly by the letters that travel between London and New York. While there are no embellishments or footnotes, this small set of correspondence reads as well as any fully developed novel — with suspense, comedy and disappointment that at times can make you sob.

Hanff's first enquiry sets the tenor of the collection beautifully

‘Gentlemen: Your ad in the Saturday Review of Literature says that you specialize in out-of-print books. The phrase “antiquarian booksellers” scares me somewhat, as I equate “antique” with expensive. I am a poor writer with an antiquarian taste in books and all the things I want are impossible to get over here except in very expensive rare editions, or in Barnes & Noble's grimy, marked-up schoolboy copies.  I enclose a list of my most pressing problems. If you have clean secondhand copies of any of the books on the list, for no more than $5.00 each, will you consider this a purchase order and send them to me?
Very truly yours,
Helene Hanff
(Miss) Helene Hanff'

Hanff, while revealing a vast knowledge of and appreciation for essayists, poets, orators and philosophers have long gone and out of print (think Walton's Lives or Leigh Hunt's essays) spends the better part of her transatlantic communiqués trying to wear down Doel's British reserve. I'm not giving away too much by saying that she succeeds. Nevertheless, the two characters present a fascinating study in cultural contrast.

When a letter from Marks & Co. addresses Hanff as “Madam,” she adds the following tart postscript to her response: “I hope ‘madam' doesn't mean over there what it does here.”

84 Charing Cross Road will resonate with anyone who relishes the tactile beauty of regally bound, hand press books — or with anyone who can appreciate the book as a cultural artefact. On May 11, 1952, she writes:

‘Dear Frank:
Meant to write you the day the Angler arrived, just to thank you, the woodcuts alone are worth ten times the price of the book. What a weird world we live in when so beautiful a thing can be owned for life — for the price of a ticket to a Broadway movie palace, or 1/50th the cost of having one tooth capped.
Well, if your books cost what they're worth I couldn't afford them!'

Perhaps what I like best about this book is Hanff's overwhelming hunger for the London she sees in the books she treasures.

Check out our book review category

‘I live for the day when I step off the boat-train and feel its dirty sidewalks under my feet. I want to walk up Berkeley Square and down Wimpole Street and stand in St. Paul's where John Donne preached and sit on the step Elizabeth sat on when she refused to enter the Tower, and like that. A newspaperman I know, who was stationed in London during the war, says tourists go to England with preconceived notions, so they always find exactly what they go looking for. I told him I'd go looking for the England of English literature, and he said: ‘Then it's there.'

And you'll find it and then some in this, one of my top ten favourite books of all time, available at Amazon. You may also want to check out the excellent 1987 movie version of the same name that stars Anne Bancroft as Hanff and Anthony Hopkins as Doel.