I hope you're all recovering nicely from the Independence Day festivities. I don't know if 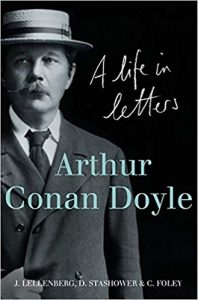 you caught it, but on July 4th those excellent people at WETA (PBS station 26 in Washington) broadcast a Sherlock Holmes marathon featuring the series that stars Jeremy Brett, whose Holmes rocks my world. (Acknowledging, of course, that Basil Rathbone set the bar.)

But if you've already seen all the Sherlock Holmes dramatisations – and read all the stories — then the next logical step would be to track down a copy of Arthur Conan Doyle: A Life in Letters, for an unparalleled view of the mind behind the celebrated sleuth.

A Life in Letters is just that: a collection of Conan Doyle's correspondence, beginning with his days at boarding school in 1867 and continuing through 1920 when he was in Australia and his mother died of a cerebral haemorrhage. The letters were put together by Charles Foley (Conan Doyle's great-nephew), Jon Lellenberg and Daniel Stashower, all three of whom are members of The Baker Street Irregulars, an organisation devoted to Sherlock Holmes scholarship.

The bulk of the correspondence is addressed chiefly to Mary Doyle, “the mother” or “the Mam,” as Conan Doyle liked to refer to her. Several of the letters are illustrated by Conan Doyle and the editors have included just the right amount of context where necessary.

Conan Doyle was determined to be a success as a physician

I love to read letters in general, and Conan Doyle's are a particular treat. From his earliest days at Stonyhurst, he proves himself a vivid correspondent with a knack for both description and narrative. You'll find in this collection his determination to become a success as a physician and to support his family, as well as the deliberate cultivation of his own literary gifts. For example, in 1883, Conan Doyle, still struggling with his practice in Portsmouth, writes to his mother:

“[…] I hear the Boys Own Paper are going to publish something of mine. I must hurry on and write something larger & more ambitious. I want some three figure cheques and shall have them too. Why should I not have a future before me in letters, surely no one ever went through a more successful novitiate? It is seldom indeed that my yarns have come to grief. James Payn [editor of The Cornhill] had 20 refused in a year — I hardly ever have one now. I am conscious too of a well-marked style of my own which should single me out among the crowd for good or evil…[.]”

You'll also encounter a marvellous sense of humour, especially as he looked at himself. Writing to Charlotte Drummond (a sort of second mother to Conan Doyle) he thanks her for some shirts she sent him and says:

“The collar is a masterpiece. I have a crutch stick of ebony and silver which I won as a prize and with the collar, I am more than a masher – I am a dude – which is an Americanism for the masherest of mortals.”