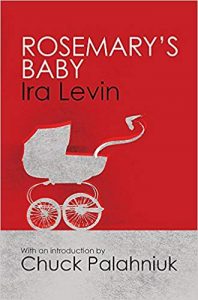 is just as good (as in complex and riveting) as the novel.

If you've never experienced either, you're missing out.

In case you don't know the story behind Rosemary's Baby here's a short sum-up: Rosemary and Guy Woodhouse are newlyweds who score an apartment in New York's coveted 19th-century building, the Bramford. Like much in the world that is high profile, the Bramford has a bad rep to precede it — one that includes cannibalism and satanic witchery.

Rosemary makes over the apartment, gets chummy with her neighbours, the Castevets, and finds out she's pregnant. Bizarre dreams, strange chantings filtering through the apartment walls, and spurious behaviour from her husband lead Rosemary to believe that her baby is being bred for some devilish ritual.

The absurdity of Rosemary's situation and the loss she finds herself at to explain it to herself and those she hopes can help her are writ painfully large in the book and film. Devil-worship seems slightly ridiculous in the twenty-first century. And yet, there are still — even today – those who believe. But who would believe Rosemary? This, perhaps more than the satanism, is what makes Rosemary's Baby so creepy and compelling.

In some ways, I almost like the film more, because even after countless (10 or more?) viewings, I always notice some new, subtle little clue that feeds.

Rosemary's paranoia. Guy slips away on the flimsiest pretexts. To get an ice-cream cone in the middle of the night, for example, when pregnant Rosemary is supposed to be the one with the yens.

In the book, the clues to Guy's and the Castavets' deception are made a bit more explicit. But the pacing is spot-on. And in the book's defence, I think Rosemary's character is stronger, smarter (she reads Dickens and Gibbon's Decline and Fall, to give you an example) and less willing to give in to the idea that she's being persecuted than as she's played by Mia Farrow. But Mia Farrow's creation is just as believable, if not quite as likeable.

I also like the character of Hutch (a British transplant who writes children's adventure stories), which gets a bit more play in the book than the film. But this is really splitting hairs over what are, in my view, two brilliant literary works.

I took a quick trip to New York City the weekend before last, to meet up with a friend of mine from London who was working a sale at Christie's, and brought the book with me to read on the train. It was just the sort of NY-atmosphere I was looking for.

Levin's 1967 novel is still in print (I told my friend Jules that I thought it was out of print — mea culpa) and available. Roman Polanski's directorial masterpiece is available on DVD. I highly recommend both.