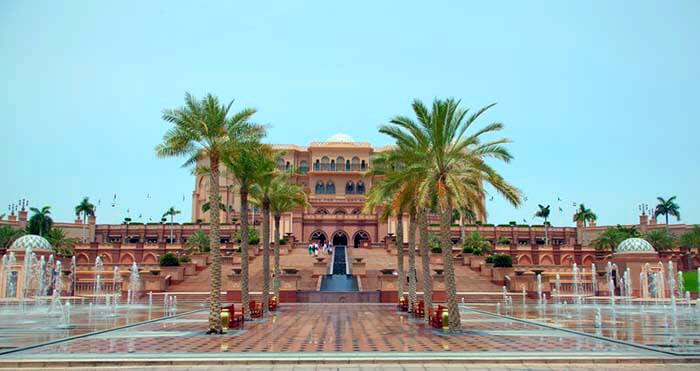 Abu Dhabi – both capital city and largest (and most wealthy) of the seven United Arab Emirates – lies on the central western coast of the Persian Gulf, as it has for some five thousand years.

The growth of Abu Dhabi

It was not until the mid-1960s that Abu Dhabi rose to international recognition with the transfer of power from one brother to the other and the consequent release of the oil revenues once so cautiously banked. Development was nothing short of spectacular with the crowning glory with the construction of the Emirates Palace, perhaps the most luxurious hotel built to date, costing a cool three billion US dollars. The most expensive being the Marina Bay Sands in Singapore, a casino complex with an estimated total build price tag of US$8 billion).

The past 40 years in Abu Dhabi have seen the growth of a modern metropolis with the construction of high-rise buildings, luxury hotels, broad streets, beautifully landscaped parks and gardens and modern commerce.

The current population of Abu Dhabi

Abu Dhabi is home to a population of about 2.4 million, that's approximately 30% of the combined UAE. According to the CIA world factbook on the Middle East, the population of the UAE is now 9,701,315 (July 2018).

The slump in oil prices in the late ’90s saw the emirate rethink and diversify, especially since 80 per cent of the federal budget came from oil revenue.  And thus the focus on tourism with the decision to redevelop Lulu Island (aka Alu Lulu Island), a large man-made island jutting out into the Arabian Gulf off the west coast of Abu Dhabi.  Still undergoing its transformation, an admixture of residential and commercial properties, hotels, restaurants, landscaped gardens, bird and animal sanctuaries and fun-parks will eventually transform the island into one of the Middle-East’s most engaging tourist destinations.

Tourism revenue on the rise

Tourism has definitely become big business – the Abu Dhabi Tourism Authority (ADTA) reported almost 5 million visitors to the 160 hotels in the capital in 2018, a 9,8% rise annual rise in tourism.

There are over 200 islands along the Gulf coastline, many of which are privately owned but which nevertheless are becoming locations for tourism.  Major airlines and tour operators including British Airways offer competitive package deals to fit most budgets, with regular flights to and from Abu Dhabi.

Though all this talk of growth is of great importance for the emirate one must not forget that this Gulf coast city is steeped in tradition which can be observed when visiting the stunning Sheikh Zayed ‘Grand’ Mosque.  As one of the Worlds’ largest mosques, it is able to accommodate over 40,000 worshippers, and unlike many buildings of its type, visitors of all ethnicities are welcome for guided tours between 9am-10pm Saturday through Thursday but be warned, there are certain regulations that one must abide by whilst visiting this holy and spiritual space.

In the summer months, the climate in and around Abu Dhabi can prove challenging for many Westerners given extreme temperatures and high humidity. That said, all buildings in Abu Dhabi are air-conditioned and the abundance of greenery lessens the impact.  October through May is considered the better months to enjoy a stay in the Emirate with temperatures ranging from a low of 14ºC in January to a high of 37ºC in May. Rainfall is negligible throughout the year but the occasional sandstorm can suddenly reduce visibility to mere meters.

Another popular pastime in Abu Dhabi is shopping and with the many Souks (open-air markets) that take place throughout the city you will be spoilt for choice from Food souks focusing on local produce and noted for an abundance of date sellers; Spice souks obviously selling fresh herbs and spices; Gold souk – gold, and for one of the oldest and most traditional experiences then one must visit Mina souk.  Wandering around these traditional marketplaces will give one a true taste of the old culture of Abu Dhabi.

At the other end of the spectrum, there is Yas Island, a man-made island completely dedicated to entertainment.  At Yas Marina one may charter or rent a yacht, enjoy dinner at the world famous Cipriani restaurant, or an evening of fun at the Allure nightclub, courtesy of Cipriani.  However, if fast cars are your passion then the Yas Marina Circuit will be the right track for you!  Qualified instructors offer tips and instruction to drivers (in their own vehicles) allowing them to test their driving skills in a safe and controlled environment on the Etihad Airways Abu Dhabi Grand Prix circuit where the world famous race will be held on November 28 to December 1, 2019. Alternatively, let someone else do the driving as you take a track tour in an air-conditioned bus, and visit the state of the art 500-seat media centre and pit garages as you imagine the world-class racing drivers revving up their Formula 1 racing cars for the big race!

Currently, under construction and due for completion in 2020 is Saadiyat Island.  The developers, TDIC (Tourism Development & Investment Company) describe their vision for the Island as, ‘Saadiyat will be an irresistible magnet attracting the world to Abu Dhabi, and taking Abu Dhabi to the world’. It will feature waterfront properties, the Gulf’s first tidal and ocean golf courses, art galleries and museums, including the Guggenheim Abu Dhabi, designed by world-renowned architect Frank Gehry and Louvre Abu Dhabi, created by Pritzker Prize-winner Jean Nouvel.

The Center offers 133,000 square meters of exhibition space and a multi-storey car park. To complement the initiative, additional hospitality suites are available across the Emirate, as are meeting and conference facilities.

Quite apart from redeveloping its commercial and cultural heritage, the emirate hosts the Abu Dhabi Golf Championships and is world renown for producing some of the hottest competitors in powerboat racing, the national teams of the United Arab Emirates achieving world prominence.

To cater to the high visibility of international sporting events and the general commercial attractiveness of the Emirate, business hotels in Abu Dhabi are luxury properties – many sporting unique qualities and all are situated in an ideal location in for a business meeting or conference.