A friend of mine complained recently that I don't recommend enough “guy” books. Judging from last week's blog, there might be some truth to that. So here's one for the boys.

Okay, okay. This one is written by a woman. But Mary Shelley's Frankenstein is packed with adventures that, in my mind at least, many guys will relate to. The gothic tale is dispatched from an exploratory voyage to the North Pole, long before Peary and Henson even dreamed of setting a flag there in the early twentieth century. It's full of science and sea-faring, death-defying pursuits and even hand-to-hand combat.

Not a monster, a scientist 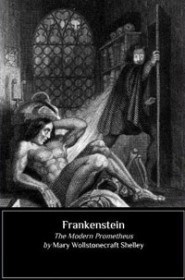 Thanks to productions ad nauseam for film, stage, radio and television, it's too easy to lose sight of Shelley's vision of Victor Frankenstein and his demoniacal creation. (That's right — Frankenstein is the name of the scientist, not the monster.) And it's easy to forget what a great read this is.

Frankenstein is a cleverly framed narrative. We're first introduced to Robert Walton, who writes a letter to his sister telling of his intention to captain an expedition to the North Pole. His drive for discovery is echoed in the character of the young Victor Frankenstein, whose overweening passion for scientific achievement — particularly in the area of galvanization, or the theory of animating the inanimate by manipulating electrical currents — leads to his moral and psychological undoing.

Frankenstein's monster, a man of fearsome and gigantic stature

The two pioneers meet when Walton's ship becomes ice-locked. Walton perceives in the distance “a being which had the shape of a man, but apparently of gigantic stature” driving a sledge madly across the ice. Frankenstein isn't far behind and, lured by the hope of capturing the creature with Walton's ship, comes aboard and relates his incredible tale.

Pop culture gets it right. Frankenstein's monster is fearsome — at least in appearance. Frankenstein stitched him together from pieces of corpse fished from charnel houses and graveyards. Frankenstein regrets the very moment he gives the creature life:

How can I describe my emotions at this catastrophe, or how delineate the wretch whom with such infinite pains and care I had endeavoured to form? His limbs were in proportion, and I had selected his features as beautiful. Beautiful! — Great God! His yellow skin scarcely covered the work of muscles and arteries beneath; his hair was of a lustrous black, and flowing; his teeth of a pearly whiteness; but these luxuriances only formed a more horrid contrast with his watery eyes, that seemed almost of the same colour as the dun white sockets in which they were set, his shrivelled complexion, and straight black lips.

But this tale is classic romanticism, and the creature is inherently good. Think of Rousseau's noble savage. It is society and its unwillingness to accept the unconventional and the ugly that turns Frankenstein's creature on a path to evil.

Science for the betterment of humanity

Some readers have interpreted Shelley's Frankenstein as a rebuke of scientific progress. In fact, it is nothing of the sort. Rather, Shelley is arguing for the use of science with the betterment of humanity as its most important aim. The novel stresses the importance of taking responsibility for the implications of scientific discovery. I often think of Albert Einstein as a real-life parallel to Shelley's “modern Prometheus” (the subtitle of her novel), who lived to rue the letter he signed to FDR outlining the feasibility of the physics that would make possible the atom bomb. Victor Frankenstein abandons his creature the moment he gives him life. A fatal error.

Byron suggested that each guest write their own horror story

Many of you may know the story of Frankenstein's creation. Shelley and her husband, Percy Bysshe Shelley, went to the Lake District in Switzerland in the summer of 1816. Lord Byron was there, polishing the third canto of Childe Harold. The weather was uncongenial and the vacationers found themselves too often indoors. They read German ghost stories to pass the time when Lord Byron proposed that each should write their own. Shelley writes that Frankenstein came to her as if it were a “waking dream.” She was 18 at the time of the novel's conception.