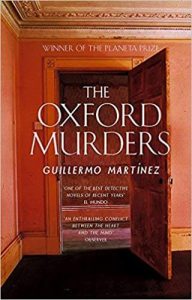 Normally, I don't find myself thinking much about theoretical mathematics. But as it happens, I picked up The Oxford Murders, by Argentine writer Guillermo Martinez, just after reading a New Yorker profile of Grigory Perelman, a Russian mathematician who is supposedly the first to have proved the Poincare conjecture — a problem that's puzzled mathematicians and cosmologists for more than a century (“Manifold Destiny,” Aug. 28, 2006). Perelman's story had all the narrative suspense of a good murder mystery. And it put me in just the right frame of mind for Martinez's little mathematical murder game.

A cryptic note sets the scene in The Oxford Murders

In The Oxford Murders, an unnamed narrator from Buenos Aires wins a scholarship to study algebraic topology at Oxford. There he crosses paths with the renowned logician Arthur Seldom — at the scene of a murder. Someone sent Seldom a cryptic note that foretells the slaying. At the bottom of the note rests a small, perfect circle.

The symbol is meant to be the first of a series. But what kind of series? Numeric? Alphabetic? And how does the symbol connect to the killing? That's the puzzle that Seldom and the narrator must figure out before word of the murder spreads through Oxford and upsets the scholarly serenity of the town.

In the meantime, Seldom lays out interesting logical puzzles for his foil and readers alike. If, for example, you were given the following three symbols:

What symbol would logically follow? Are three symbols enough to give an accurate prediction of the next item in the series?

An objectifying point of view of the female characters

A stimulating challenge, to be sure. Nevertheless, I have two complaints about The Oxford Murders. To begin with, Martinez describes the women in this story first and foremost in terms of their sexual attractiveness — the length of their legs, the come-hither look in their eyes. While the female characters include a professional cellist, an accomplished tennis player, even a woman mathematician who serves as the narrator's adviser, it's difficult to get past the narrator's objectifying point of view. And the woman mathematician holds no more than a walk-on role.

Second, much of the plotting of The Oxford Murders rests on coincidence — a coincidence that skirts contrivance. Everyone with a speaking part in this story is up on his Pythagorean history.

Even so, it's a compact novel (a trim 197 pages) and the pacing is right. And just when you think you know whodunit … think again. Martinez manages many keen observations on human nature and illuminates the allure of closed societies, like the mathematical world at Oxford. I also like the literal play on words: a serial killer who teases justice by leaving behind parts of a series.