I'm going to be like the subject of Alan Bennett's new novella and press it on everyone I meet. The Uncommon Reader — a little gem that imagines how life in England would change if its most significant personage, Queen Elizabeth II, suddenly became an avid reader — is that good.

As the book begins, careening royal dogs lead the Queen to a mobile library parked behind the kitchen at Buckingham Palace. With duty in mind, the Queen, not much of a reader of literature, feels compelled to borrow a book and strike up a conversation — and eventual literary partnership — with the palace's dishwasher.

In Bennett's (of The History Boys renown) hands, a more absurd setup was never so believable or amusing. 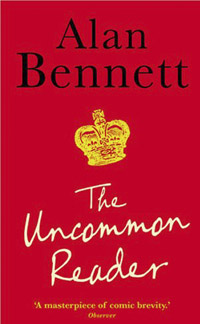 At first, reading gets the Queen out of a few less palatable royal obligations. No time to tour a road-research laboratory; It's Wednesday, and I must return Nancy Mitford to the travelling library!

And as the Queen's appetite for reading expands, she quickly discovers “how one book led to another, doors kept opening wherever she turned and the days weren't long enough for the reading she wanted to do.” Quite.

Soon enough, however, reading starts to get the Queen in trouble. Much like the royal dogs, Her Majesty's new pastime isn't much appreciated by the staff. Monarchical duties, which she once looked forward to, suddenly seem tiresome — the endless openings, christenings, speeches and greeting lines. The Queen becomes irritable and bored. She would, after all, rather be reading a book.

She rues the opportunities she had in the company of famous writers — E.M. Forster, Sylvia Plath, Philip Larkin and T.S. Eliot — because she encountered them all before she was “a reader.”

Worst of all, she begins putting her subjects on the spot:

A change in language

‘It transpired that with no prior notification to her attendants the Queen had abandoned her long-standing lines of inquiry — the length of service, distance travelled, place of origin — and had embarked on a new conversational gambit, namely, ‘What are you reading at the moment?' To this very few of Her Majesty's loyal subjects had a ready answer (though one did try: ‘The Bible?').

Try The Lady Elizabeth if you want a good read

There are so many delightful aspects to this book — it's sly humour, the resonant portrayal of both the Queen and her private secretary, Sir Kevin, and the quick tour through literary England, imaginatively narrated by none other than the Queen herself. My favourite part, perhaps, is Bennett's use of the royal “we.” If you saw Helen Mirren in The Queen and liked it, I promise you will like this book.'

In essence, though, The Uncommon Reader is a clever turn of the ages-old idea that if you want to keep your subjects in line, keep them in the dark.

With all the Her Majesty's mind-broadening reading, she proves herself quite a handful.

Where to buy the book The Uncommon Reader