You'd never call A Woman in Berlin: Eight Weeks in the Conquered City light summer reading. But this diary, written anonymously and republished in the United States in a restored edition this past autumn, and is available in the UK at Amazon, casts its own kind of narrative thrall.

The diary, begun on Friday, April 20, 1945, gives an acutely observed day-by-day account of life as viewed by a woman in Berlin as the city fell to Russian forces. Like many other WWII accounts, you won't find many heroes in this story. It's a story of survival, plain and simple.

The horrors to women in the final days of Berlin 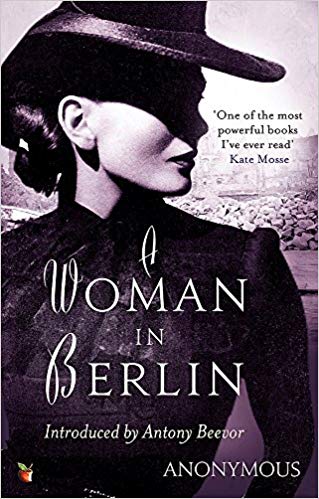 Historians estimate that one out of three of approximately 500,000 women living in Berlin during its fall was raped by Russian soldiers. Many–and Anonymous is no exception–were repeatedly violated.

Anonymous sets down the sense of foreboding–for the women had heard rumours of the fate that was headed their way–with her first entry:

“It's true: the war is rolling toward Berlin. What was yesterday a distant rumble has now become a constant roar… We've long given up trying to figure out where they are positioned. We are ringed in by barrels, and the circle is growing smaller by the hour”.

Occasionally, there's a brief respite from the air-raids and artillery. Anonymous catches the scent of lilac and the budding green of acacia and suddenly remembers it is spring. “Only the birds seem suspicious of this particular April: there’s not a single sparrow nesting in the gutters of our roof.”

Anonymous was a journalist who travelled extensively through Europe before World War II began. She spent time in Russia and wisely puts her rudimentary knowledge of the language to use. It becomes her last defence–and a bargaining chip. She finds herself a mediator between Russian soldiers and the rest of her community.

As Berliners lose electricity, water, and eventually food – especially devastating is the lack of milk for infants – she is able to negotiate with her captors, frequently trading sex for food, alcohol and protection.

While Hitler and his loyalists hid out in a luxuriously provisioned bunker, he made no secret of his disregard for German civilians. He was content to let them starve and suffer whatever humiliation the Red Army dealt them.

The diary is worth reading because it considers the devastating effects of war as they were felt from a German civilian perspective. A tough bid for sympathy, to be sure, but as Anonymous writes in her diary, you notice a conspicuous lack of self-pity. Her tone is plucky, ironic and at times even comic–gallows humour, she calls it.

Why she remained anonymous

The author's decision to remain anonymous was doubtless twofold. She exposes more than one inconvenient truth in the course of this narrative, not the least of which is that German men failed to protect their women and children from mass rape, deprivation and starvation. She also lays bare her own desperation and humiliation by setting down in exacting detail the great lengths she went to just to survive.

What prompted Anonymous to keep this diary? “It does me good, takes my mind off things,” she writes. Why should we read it? You feel her pain – and the pain of every woman who has ever faced the fallout of war.