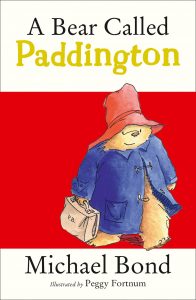 I've not read in more than twenty years: Paddington Abroad. And the visit proved surprisingly delightful after all this time.

In fact, next year (2008) it will be exactly fifty years since Michael Bond brought his most unusual and accident-prone bear out of Darkest Peru and landed him at No. 32, Windsor Gardens, London, an official member of the family of Browns (people, that is).

The author is releasing a new set of adventures for the marmalade-loving bear Paddington Here and Now – (see what I did there?)

To commemorate Paddington's big day, HarperCollins appears to be re-releasing the series – the second coming of A Bear Called Paddington, the first book of eleven, originally, is set for June 26 – though I'm sorry to say not with the original illustrations by Peggy Fortnum.

I'm sorry because, for me, Fortnum's illustrations are what makes Paddington's predicaments so amusing. While I've not seen R.W. Alley's illustrations up close, Fortnum's simple line drawings provide just the right amount of understatement, such as the one that shows Paddington, head down, pedalling his trike like mad, surrounded by a swarm of cyclists competing in the Tour de France. Oh, the suggestion of a line!

Tour de France on a tricycle

Entree into this world-class event (on a tricycle rescued from a junk shop, taken apart and reassembled by none other than Paddington) is just the crowning moment in the long series of bear-inspired mishaps chronicled in Paddington Abroad. The Browns decide to take their holiday in France, but not before Paddington can create a fracas (emergency vehicles are summoned) at Floyds Bank and “trouble at the airport.” How does a bear obtain a British passport, anyway?

In France, of course, there's the marmalade-stained map that throws the Browns off-course (Paddington was left in charge of the “eyetinnery”), a serendipitously good escargot stew, a yacht that's lost at sea, and an unexpected bass drummer bringing up the rear of the band. (Whoever could that be?)

But it's all in jolly good fun, as all bears seem to land on their feet.

If you can find a second-hand copy of any of the original Paddington books, by all means, snap it up. I found More About Paddington and Paddington Abroad at a library sale.