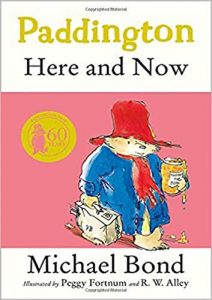 It's hard to believe that Paddington Bear celebrates his fiftieth birthday this year. What with one mishap after another, who'd have thought he'd have made it so far?

To celebrate the unexpected milestone – and perhaps to keep up with the times – Michael Bond, Paddington's authorial steward, has set the indefatigable bear in a new set of adventures called Paddington Here and Now.

Rumour has it Paddington finds himself mulling over such modern dilemmas as displacement and wrestling with that metaphysical conundrum: where is home? Darkest Peru or No. 32, Windsor Gardens, London?

A stowaway at Paddington station

I've not yet laid my hands on a copy, but when I heard the news, I immediately went to the shelf for my well-used copy of A Bear Called Paddington. I never get tired of reading this, the first instalment in a delightful series of unfortunate events that befall a bear that arrives stowaway at Paddington Station in London and is taken in by the Brown Family.

There are so many delightful nuances to this series, begun in 1958, and that now stretches over 13 volumes. In many ways (especially with this 13th instalment), I think of Paddington as the forerunner to Lemony Snicket's Series of Unfortunate Events. Both series strike that magical balance that perfectly melds the real with the absurd.

Londoner's never blinked an eye at a talking bear

One of the things that take you in right away in A Bear Called Paddington is the way that all of London scarcely turns a hair at the idea of a talking bear with an insatiable appetite for marmalade. The only exception is the merest hesitation on Mr Brown's part when he exclaims that taking a stowaway bear home from Paddington Station would be “most irregular!” Paddington, above all, is polite, and that, it seems, is what buys his breezy acceptance into British society.

Of course, as with the Lemony Snicket series, there's no shortage of gentle satire in these books, especially when it comes to people and their affectations and idiosyncrasies.

To give you a little taste is this excerpt from when Mrs Brown takes Paddington on one of her infamous shopping expeditions.

The man in the gentlemen's outfitting department at Barkridges held Paddington's hat at arm's length between thumb and forefinger. He looked at it distastefully.
“I take it the young … er, gentleman, will not be requiring this any more, Modom?” he said.

Bond is also brilliant with dialogue, as is evident when Paddington gets his first taxi ride (after a mishap with some jam-filled buns).

The driver looked hard at Paddington and then at the inside of his nice, clean taxi.
“Bears is sixpence extra,” he said gruffly. “Sticky bears is ninepence!”

In my humble opinion, Paddington Brown, you're ageing quite well.