It may be time to admit defeat. I really, truly meant to have a work of non-fiction all ready to recommend for my discerning readers. But you know how it goes. One book leads to another and suddenly the 2008 reading plan has been scrapped.

In any case, I think you will like Angelica, by Arthur Phillips, the book that led me astray.

What is Angelica about? 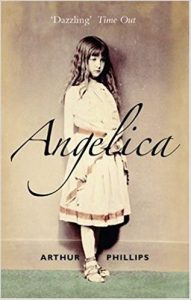 the most part is competently told. Constance Barton thinks her home possessed by demons bent on harming her only daughter when in fact the actual cause of spiritual disturbance may have much more to do with the world of the flesh than Constance cares to admit.

She awakens every night at precisely 3:15, goaded by a sinister compulsion to rush to her daughter's room and make sure she is safe. Is an unspeakable crime being carried out the moment Constance lowers her guard?

A spiritual adviser, Anne Montague, is summoned to the Barton's home to exorcise any pervading evil. So far, nothing out of the ordinary for a good Victorian chiller.

But Angelica takes a surprisingly modern turn on several points. To begin with, Anne Montague is a shade more complex than the stereotypical mediums of ghost stories past. A stint on the stage prepares her for what turns out to be exercises in practical psychology.

In fact, Anne is an excellent reminder that more often than not the ghosts that haunt our present are slippery metaphors for all-too-human feelings of fear and guilt.

In another nod to modernity, the story is told from alternating narrative points of view. We get a tightly woven version of events from Constance, Anne, Angelica and even Joseph. The shifting perspectives make Angelica into a sort of modern-day mystery (was there a crime or no?) and again suggest that what is fearful and haunting is often only a matter of perspective.

I say that this is a novel set in the past that is for the most part competently told. The dialogue sounds right and the setting and characterizations ring true. But Phillips has an occasional tendency to overuse adjectives. As in:

“The burst of morning sunlight startled the golden dust off the enfolded crimson drapery and drew fine black veins at the edges of the walnut-brown sill.”

To be fair, this stylistic overkill appears on the first page of the first chapter, after which Phillips quickly hits his stride and the glut of adjectives seems to vanish. But I thought I'd mention it.

Phillips is the author of The Egyptologist and Prague, two more works of fiction I'll likely now add to my list.