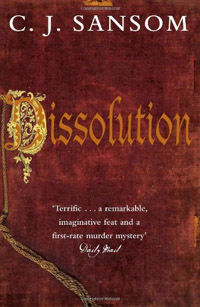 A few months ago, I mentioned reading C. J. Sansom's Sovereign, the third in an excellent series set during the reign of King Henry VIII.

Well, I've finally gotten around to the first instalment, Dissolution, and am just as taken.

Again (or, technically, for the first time) Matthew Shardlake proves an enlightening guide to the dark political recesses of early modern England.

Sansom holds a PhD in history and was a practising attorney, and so has little trouble dramatizing the turbulent and treacherous politics of Henry the VIII and, especially, Thomas Cromwell, who on the King's authority and in the spirit of ecclesiastical reform, sought to dissolve the monasteries in England — hence the book's title.

Shardlake, an interesting study himself for his crooked back and straightforward character, is summoned by Lord Cromwell to investigate the murder of a commissioner sent to persuade the abbot of a monastery at Scarnsea to surrender its property and turn over its wealth to the crown. What's more, at the time of the murder the monastic alter is desecrated and Scarnsea's most precious relic — the withered hand of the penitent thief said to be crucified with Jesus — goes missing.

The relic was believed to have the power to reverse physical deformity, and so there's more than one layer of dramatic irony woven into Sansom's mesmerizing yarn.

The commissioner's death looks to Shardlake very much like execution and brings to mind the beheading of Queen Anne, a stroke believed to be engineered by Cromwell.

Dissolution sets a high bar for this series, which as far as I can tell, continues to meet the mark. When I was in London in May, I noticed there's a fourth book out called Revelation. If the title's anything to go by, that's one for the “to read” pile, too.