If you liked Josephine Tey's The Daughter of Time there's a 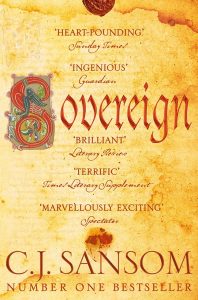 Cromwell's head is already on a spike in this mystery, set well into the rule of King Henry VIII. The King is married to Catherine Howard (fifth wife of six) and his reign is showing every sign of decadence. The monastic order has been broken and staggering amounts of wealth are funnelled into the royal coffers. The King has grown morbidly obese, perhaps impotent; even the flesh of his leg has begun to rot. The Queen's been spotted too often in the company of the infamous Sirs Culpeper and Dereham. To top it all, a casket of papers comes into play that could call into question the King's legitimacy and claim to the throne.

History provides Sansom with a deliciously rich backdrop for conspiracy and intrigue — a canvas the author exploits to full advantage. Lawyer Shardlake finds himself the protector of a captured rebel from the north — a mission that sparks more ethical compunction than a sense of duty to King and country for the scrupulous Shardlake. His job is to keep the prisoner fit to withstand interrogation at the hands of torturers in the Tower of London. Worse, Shardlake gets a glimpse of those treasonous documents before they're snatched from him by brute force.

Much of the tension rests on who is an ally and who is a spy. And, as you can imagine, the slightest misstep on this treacherous political stage could land Shardlake in the Tower himself.

(A note to the squeamish: there's a vivid torture scene or two. If you have an aversion to images from the rack or the vice, this may not be the book for you.)

But don't be put off by the almost 600 pages of this novel. Sovereign is never short on period atmosphere and episode. And where Tey's take on royal intrigue sometimes felt like a history lecture because of the nature of its setup, Sovereign has the advantage of being set in the moment, a period in history that I promise you won't find dull.