Just a short blog this week because I'm not feeling my best. 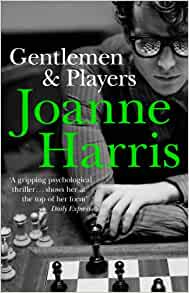 It seems like I fell prey to the nasty cold-flu virus that stormed campus last week. Fortunately, I have the perfect book to recommend for aching, stuffy heads: Gentlemen & Players by Joanne Harris.

What is Gentlemen & Players about?

It's a psychological thriller centred around an exclusive boys' prep school in England. A precocious porter's child nurtures a bitter resentment over growing up on the wrong side of the gates of St. Oswald's. And so a Machiavellian plan is hatched to bring the stately institution to its knees.

One of the book's appeals for me is a plot based loosely on a game of chess. Aside from obvious section titles (En Passant, Check, etc.), several of the characters embody traits of certain chess pieces. Snyde, the porter's kid, for example, is depicted as a pawn: of little value, largely invisible, but under the right circumstances, able to hold a king in check or sneak in and promote itself to queen. Pat Bishop, the second headmaster, is blinded by his loyalty to the school and therefore has limited mobility.

Harris also borrows Dickensian naming convention, which I happen to like. One of the narrators, Roy Straitley, is a classics' master at St. Oswald's and is perhaps the most fair-minded character I've met to date in fiction.

As a thriller, it should come as little surprise that there's a brow-raising plot-twist near the end. And I promise that you'll ask yourself — perhaps long after you've closed the book — just who are the gentlemen and who are the players in this world?

Harris, English of course, is also the author of Chocolat and Holy Fools, among others. I picked up my copy last spring while waiting around at Heathrow Airport…