Rarely do I find a book that keeps me turning pages into the wee hours. But The Good Wife, by Stewart O'Nan, is one I couldn't put down. 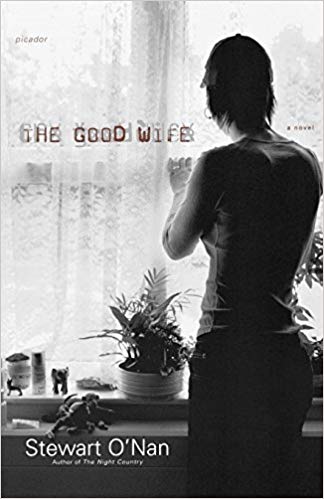 Imagine this: You're in your twenties, recently married, sure you're in love, pregnant with your first child. Then one night, late, the phone rings. Your husband's not on his side of the bed. He's in police custody, charged with felony burglary and murder. He's handed the maximum: 25 to life.

Just such a terrible decision confronts Patty Dickerson, whose husband goes out after a soccer match and doesn't come home for another 25 years. Tommy Dickerson is with a friend at the scene of a burglary that goes badly wrong. Whether he's responsible for the crimes is beside the point. His friend turns prosecution and Tommy's fate is irrevocably sealed.

What is The Good Wife about?

In many ways, The Good Wife is a story of waiting, an elegy to the passage of time. We watch in helpless dismay as Patty gives birth to their son, alone, faces the numbing disappointment of turned-down appeals, and struggles from one low-paying, high-risk job to another. Eventually, Patty ends up on welfare. Their son grows up. And all the while time's wheel is turning, faster than it seems possible.

The way the prison system is set up

Yet one thing remains constant: Patty never wavers in her commitment in sticking by Tommy, even when the system seems determined to grind her down. Tommy's lawyers are court-appointed, the first providing insufficient counsel. While serving his sentence, Tommy's transferred twice without notice — each time further away from Patty and her son. Patty finds she can lose a visit on a guard's whim, and to lose her temper throughout all this is fatal.

“The way the system's set up, it's like a price they're supposed to pay over and over until they give up and stop loving the people they've come to see, and stop coming. That's why she has to submit, why, even as she hates everything about this place, she needs to be here”.

In some respects, Patty's serving out a sentence crueller than Tommy's. She's left to carve out her survival with little to look forward to but the rare conjugal visit and even those are taken away in the end. Patty's character is a piercing reminder that prisons are frequently of our own making.

O'Nan's decision to write The Good Wife in present tense underscores how life (and time) are always in motion. It also shows that one can't hold on to the past, no matter how desperate the urge. He has a knack for marking time with telling detail.

The story begins in the late '70s and by the time Patty makes her first visit to Auburn, a maximum-security prison in upstate New York, she's splashing herself with Jean Naté. She gets a job at the Montgomery Ward and has to track down her boss in the Layaway department. She eventually trades in her husband's Ford truck for a Horizon, then a Subaru. By the time the novel comes to a close, the characters are shaking their heads at an oversized Escalade hogging up the bay at a gas station.

Are we all doing time?

I don't think I'm giving too much away by saying that the ending of The Good Wife is satisfactory for the characters and the reader. But this novel — one of the most riveting I've read in a long while — is a poignant reminder that we're all “doing time” in one way or another.