Don't you just love it when you nip into a book and find it so yummy you can't stop yourself until you've devoured the whole thing in a single sitting?

Never minding the book-binge hangover, that's exactly how I felt while reading What Was 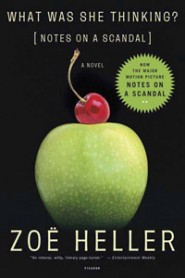 She Thinking? [Notes on a Scandal], Zoe Heller's mock tell-all narrated by a spinster history teacher who befriends a new colleague who winds up shagging one of her students.

You can tell just by the tone of her preamble:
‘And so the strangeness begins.‘This is not a story about me. But, since the task of telling it has fallen into my hands, and since I play a minor role in the events I am going to describe, it is only right that I should offer a brief account of my relationship to the protagonist. My name is Barbara Covett ….'

A book you can't put down, literally

Zeller sustains this confident style of snipe throughout, which is admirable if you like that sort of thing. And I do. I also like her Dickensian play with surnames. That Barbara's last same signifies she wants companionship is obvious. The headmaster, Pabblem, is a “progressive bully” who plagues the teachers with time-wasting staff development sessions, such as “Meeting the Challenge of Diversity, or Teaching the Differently Abled.”

Indeed the whole tattered system of public education is held up for satirical scrutiny. On Sheba's first day, she wanders into the staff lounge for introductions.

‘She was gesturing at the windows. ‘Why are all the curtains drawn?' I heard her ask. Ted Mawson rubbed his hands, nervously.

Bill Rumer, the head of chemistry, who was sitting next to Antonia on one of the foam sofas, snorted loudly at this. ‘Actually, Antonia,' he said, ‘it's so we can't look out at them. So they can smash each other up — do their raping and pillaging — and we're not required to intervene.”

Notes on a Scandal will debut in movie theatres this Christmas. Barbara will be played by none other than Dame Judi Dench – perhaps the reason why I lapped up this book as quickly as I did. Hearing Dame Judi's voice in my head as I read added a sweet layer of irony and complexity.

In the meantime look for the movie tie-in version of the book from Picador. It will probably come as no surprise that I think books are best read before one sees their film counterparts. 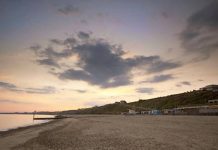