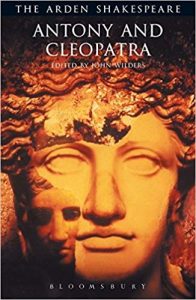 new Sidney Harman Hall last week. The Shakespeare Theatre Company's F Street digs are impressive: sleek and sumptuous at the same time. And as for the play, I think it's Shakespeare near the top of his game. (The top, for me, are the history plays and the one that shall not be named.)

Antony & Cleopatra is a tragedy of mad love and betrayal

You, my faithful readers, I am sure don't need a recap. But for the sake of completeness, Antony & Cleopatra is a tragedy of mad love and betrayal set during the run-up of the Roman Empire. Mark Antony has shacked up with Cleopatra in Egypt, deaf to all entreaties from his homeland. When Antony's wife, Fulvia, dies suddenly, he, at last, hears the call of duty and returns to Rome. Octavius Caesar sees an opportunity to strengthen the Triumvirate (and keep Antony closer at hand) by offering his sister's, Octavia's, hand in marriage.

But Cleopatra's pull proves too beguiling; Antony leaves Rome and Octavia, delivering an unforgivable blow to both brother and country.

Antony struggles with the impossible choice between loyalty to Empire and loyalty to love, making the play a study of character and politicking, certainly. But Antony & Cleopatra also contains startling poetry and a heart-wrenching death scene that I would argue takes pride of place in Shakespeare's oeuvre.

What's more, Antony & Cleopatra is fast-paced, almost suspenseful (even though, it being a Shakespearean tragedy, we know how the major players will meet their end). The drama moves deftly between Egypt and Rome, and one of the curiously modern charms is how Antony refers to Cleopatra as his “Egypt.” Doesn't that say it all?

Under Michael's Kahn's direction, the setting is classical and the acting is strong.

Adding to the enjoyment is the familiar ring of many phrases that have worked their way into the works of some of my favourite British mystery writers, known to borrow heavily from Shakespeare. The title of Dorothy L. Sayers' Gaudy Night, for example, had to have been drawn from one of Antony's most determined speeches:

‘but now I'll set my teeth,
And send to darkness all that stop me. Come,
Let's have one other gaudy night: call to me
All my sad captains; fill our bowls once more:
Let's mock the midnight bell.'

And just the other evening as I was reading Minnette Walters' The Scold's Bridle, I happened upon a reference to these immortal lines from Cleopatra:

‘My salad days,
When I was green in judgement: cold in blood,
To say as I said then! But come, away;
Get me ink and paper'

There are many more poetically prophetic moments such as these, but I'll leave you to discover them for yourselves. Antony & Cleopatra is running as part of the Roman Repertory along with Julius Caesar now through July 6. Both a must-see.

BTW, I'm off next week for another quick dash across the pond to my favourite city in the world, London. I'll be sure to update you on all the literary happenings upon my return.

Happy reading until then