Warning: You might want to stay away from this collection 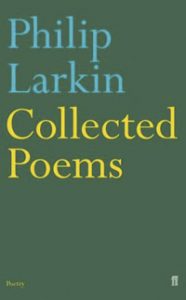 if you're really down.

On the other hand, if you're just sort-of down, then the work of Philip Larkin could well be the thing to set you right.

A man after my own bookish heart, Larkin studied at Oxford, became friends with Kingsley Amis and Bruce Montgomery (musician and writer of detective fiction under the nom de plum Edmund Crispin) and eventually went to work as a librarian at the University of Hull in 1955. He's said to have transformed that teeny nook into one of the best libraries in Great Britain. He also showed early precociousness as a poet, publishing in the BBC's weekly almost as soon as he got to Oxford and later being anthologized in Oxford Poetry, 1942-43 and Poetry from Oxford in Wartime.

After graduation, Larkin went on to publish two novels — Jill and A Girl in Winter as well as several books of poetry, all of which (The North Ship, The Less Deceived, The Whitsun Weddings and High Windows), in addition to uncollected poems from 1940-1984, are included in this edition.

Moody, bleak, achey, and often oh-so-dead-on, Larkin seems to have written a poem to match just about any frame of mind or physical state, which is why I find his work so oddly uplifting.

For instance, sometimes when you're disappointed or wronged, you have a perverse urge to hang onto the hurt and worry it like a loose tooth. Larkin's obviously been there:

‘If grief could burn out
Like a sunken coal,
The heart would rest quiet,
The unrent soul
Be still as a veil;
But I have watched all night

The fire grow silent,
The grey ash soft:
And I stir the stubborn flint
The flames have left,
And grief stirs, and the deft
Heart lies impotent.'

On the flip side of that poem about not letting go is this one, a perfect depiction of hope renewed and perhaps my favourite in the collection:

‘The horns of the morning
Are blowing, are shining,
The meadows are bright
With the coldest dew;
The dawn reassembles.
Like the clash of gold cymbals
The sky spreads its vans out
The sun hangs in view.

Here, where no love is,
All that was hopeless
And kept me from sleeping
Is frail and unsure;
For never so brilliant,
Neither so silent
Nor so unearthly, has
Earth grown before.'

Without delving into a technical analysis, I have to say that in general, the cadence of Larkin's work is high among its many pleasing traits. Another is its emotional range. And what's not to like about a poet who's so easy to understand?