“I don't care two pins what you think”

That's Bette Davis (playing Leslie Crosbie in William Wyler's The Letter) as she recounts an encounter between her and her former lover — an encounter that ends with her gunning him down on the porch of her bungalow. It's probably my favourite movie moment of all time. Each word is spat out, staccato, leaving no margin of doubt that indeed the character (and doubtless the player, too) does. not. care.

Obviously Bette Davis had that something-something, 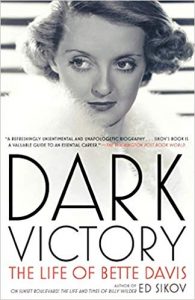 whether it was her poise, unbreakable drive or her remarkable diction (she's said to speak in italics), that immortalized her as a cinematic and cultural icon. She often played despicable characters and did it with panache. Best of all, like Leslie Crosbie, she simply didn't give a damn. (At least about what people thought of her.)

So this week I'm recommending to you — wait for it — a work of nonfiction: Dark Victory: The Life of Bette Davis, by Ed Sikov. Yes, it's a Hollywood biography, but if I'm going to read any Hollywood bio, it would be one about Bette Davis.

Sikov is a film critic and author of On Sunset Boulevard and Mr. Strangelove (both bios, one about Billy Wilder and the other about Peter Sellers). But most important, at least in my eyes, he's a Davis devotee.

What is Dark Victory about?

Davis had written quite a bit about her own life, most notably the autobiography The Lonely Life, published in 1962. But Sikov's portrait is still worth a read, and not because it's another catalogue of the films she made, the husbands (there were four) she married, and the people she crossed. Rather, it's an enlightening study of how Davis cultivated her genius for fiction-making. Sikov pretty much goes picture by picture, analyzing from every surprising angle how she produced her on-screen fireworks.

Along the way, of course, he humanizes her, too. An emotionally absent father seems to have set Davis on a course of matrimonial doom. We also learn that she was a great reader of literature. Somehow that doesn't surprise me.

The tone of the book turns a little gossipy

As a Hollywood biography, however, the tone tends to be gossipy, despite extensive footnotes. And Sikov sometimes, disconcertingly, refers to Davis's mother, Ruth Favor Davis, as “mother.” Finally, repetition, the bane of too many book-length works of nonfiction, occasionally gets in the way. (I thought if I had to read the word “Yankee” one more time, I would scream.)

That said, the prose is sensational (in both senses of the word) and the pages' wing by without your realizing it. It's just the sort of book that puts you in the mood for curling up on the sofa and popping in a good black & white. Might I recommend something starring Bette Davis?