Isn't it odd that with all the poisonings, garrottings, stabbings, and hits and runs, the work of one of my favourite authors Agatha Christie, is generally categorized as cosy? I realise the likes of Miss Marple, Hercule Poirot and Arthur Hastings rarely meet face to face with any real physical danger. And I suppose it does get pretty cosy when the players in Agatha Christie mystery dramas find themselves rounded up in the drawing-room and falling, one by one, under the suspicion of murder. Still, it's that little verbal irony that adds to the genre's appeal. 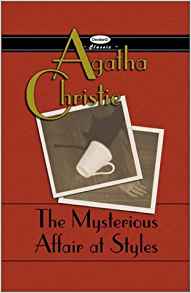 Take the gruesome death by strychnine poisoning depicted in the first of Christie's impossibly (but happily) long run of crime-detection classics: The Mysterious Affair at Styles. Wealthy Emily Inglethorp experiences paroxysms so violent, they send her sailing toward the peak of her 14-foot ceilings.

Inconveniently enough, Mrs Inglethorp had altered her will earlier that afternoon.

Absurdities and all, I've been doing a lot of reading about Agatha Christie, who as devotees will know found herself at the centre of a sensational mystery — perhaps of her own making — in December 1926. Her life, work and subsequent ensconcement as the Queen of Crime have given me an idea for a children's book I'd like to write. I'll ‘stay mum' right there, not because I'm afraid I'll jinx the project (in fact, I think the more people I tell, the more likely I am to follow through) but because I'm hoping to interest a publisher in the idea.

In any case, I can recommend two intriguing adult treatments of Agatha Christie's mysterious disappearance from Styles, her real-life home, bought with her first husband, Colonel Archibald Christie, in Sunningdale, Berkshire. 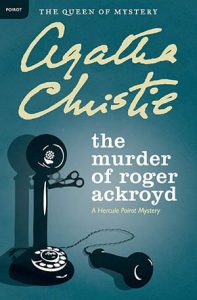 In case you don't know the story, Christie had recently published The Murder of Roger Ackroyd https://amzn.to/2GxXkFZ (an ingenious whodunit that not only established her place in the Golden Age of crime fiction but also brought her relative fame) when Archie announced he was in love with a family friend, Nancy Neele, and demanded a divorce from Agatha. Distressed, Agatha drove off late that Friday evening in December. Her Morris Cowley was discovered the next day in Surrey, rolled off an embankment and at rest against a tree with its headlights on and Christie's fur coat, expired driver's license and attache case inside it.

A murder suspect and a case of amnesia

After a manic police and press investigation — during which Archie was briefly suspected of murder — Agatha resurfaced at a spa in Harrogate, where she'd registered under the name of Mrs Teresa Neele. Archie and her family maintain, even to this day, that the renowned crime novelist suffered from temporary amnesia. 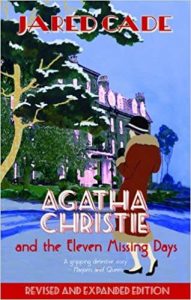 Agatha Christie and the Eleven Missing Days, by Jared Cade, https://amzn.to/2OmkRzU is a thorough reconstruction of the events leading up to Christie's disappearance, the race to find her, and the aftermath of her reemergence.

Cade combs through newspaper accounts, interviews witnesses from the time and puts forth his theory about the motivations behind Agatha Christie's most curious behaviour. A work of nonfiction that's as absorbing as almost any crime novel is currently published. 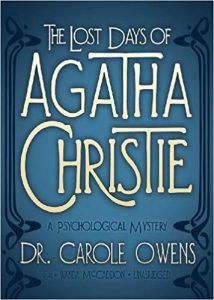 Equally fascinating is a fictional spin on Christie's so-called lost days by Carole Owens. The Lost Days of Agatha Christie (https://amzn.to/2On6Hig) takes a risky approach to getting to the bottom of her disappearance. Some twenty years after the fact, Christie agrees to spend one afternoon in the company of an up-and-coming psychiatrist, with the hope that the session will help her recover her memory of those eleven days.

I admit I was sceptical at first but found Owens' depiction of Christie thoroughly convincing. Perhaps one can't recover deeply repressed memories in the course of one afternoon, but the idea put forth for Agatha's desire to disappear (to shield herself from perhaps very real physical danger) is both shocking and insightful.

Excellent books by and about an excellent figure in British literature.