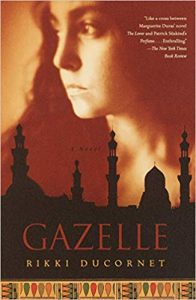 (not surprisingly, a weakness of mine) and came across a sweet little gem of a novel: Gazelle, by Rikki Ducornet.

While you may not guess from the title, the dust jacket certainly conveys the themes of sensuality and nostalgia found in this novel, set in Egypt in the 1950s. At the core, Gazelle is the story of a father and daughter who both, for their own reasons, find it impossible to shake the spell of ancient history.

Obviously Elizabeth's mother's coolness — both in action and appearance — provides sharp relief to Elizabeth's father, a man on the wane, who wears a fez and thinks about little else but ancient warfare (he travels to Egypt on a professorial Fulbright) and the background of the searing desert.

The Garden of Semblance and Lies

As she's not getting proper attention from either of her parents, the child-Elizabeth becomes entranced by Ramses Ragab, who seems to be the only friend her father has. Ramses comes by their flat every morning to play chess or games of war with tiny painted soldiers, but it is his occupation as a master perfumer and his reading of The Garden of Semblance and Lies that turns Lizzie's head. What's more, Ramses possesses the grace of a Gazelle, a quality that will forever haunt and elude her.

The point of view vacillates between Elizabeth as a child and 13 years later, Elizabeth again in Cairo, now working as an anatomist of mummies and wondering why love occasionally visits, but never stays long.

I find these flash-forwards – the adult Elizabeth and the overwrought conversations she has with her lovers — much less convincing and I rather wish Ducornet had kept the point of view static.

But it's a small quibble, as the bulk of the action takes place the summer Elizabeth is 13. What's so entrancing about this novel is its sensuousness — embodied by the character of Ramses and his perfumery and played out in just about every detail of Cairo: from the steam of the public baths and the attar of rose to a luncheon of pigeons stuffed with barley and served on a bed of spiced lentils and the one-eyed magician summoned from the far reaches of the desert and charged with the task of bringing back Elizabeth's mother.