Right. Back on track with our reading plan for 2007. 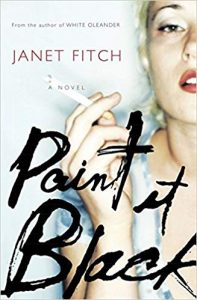 If you read that sob story and liked it (I certainly did), this one's probably for you, too. But be forewarned, Paint It Black, true to Fitchian form, reads mostly like a kick in the stomach, so be sure to check your frame of mind before you make yourself vulnerable.

Paint it Black starts with a suicide, then it gets worse

The central figure, Josie Tyrell, is another wayward, wrong-side-of-the-tracks woman just come of age when her Harvard-educated boyfriend and first real love checks out on her royally. Michael puts a bullet in his brain in a sordid motel in Twentynine Palms, and she's called to ID the body.

Michael's parents – a concert pianist and world-travelling writer – take turns playing perverse and jealous head games with Josie, trying to wrench from her the enigmatic essence of the son they failed to connect with and could never really know.

And for the first one hundred pages or so, Josie behaves like a complete misery, steadfastly refusing to let go of the one good thing she thinks she ever had or will have, in her life. While you can't really blame her – Michael leaves her a blood-spattered, angst-inducing suicide note that essentially writes off the love they shared, and Josie asks, killingly, “‘What do you do with something like this?'” – you still want nothing more than for her to snap out of it. Quit wallowing. But even the reader can't deny the ghost of Michael, which haunts every single page of this novel.

Josie is a Gauloises smoking, hard-drinking dropout – whats not to love?

At first, I had some issues with Josie's character that were difficult to reconcile. She's a high school drop-out and runaway from Bakersfield, Calif., who, when we first meet her, thinks and speaks mostly in four-letter words. While I'm no literary prude, I find it a little tiresome when the f-bomb is dropped in every other sentence. At the same time, she smokes Gauloises, paints a mural of Montmarte and offers an illuminating insight into the works and Bosch, Brahms and Schoenberg. But when I think about it, I suppose these contradictions in Josie work on a couple of levels – disabusing us of stereotypical thinking and spotlighting the complexity and mystery of character. Can you ever read anyone like a billboard?

Paint It Black is aptly named because Fitch washes her narrative canvas with a total absence of light. I admit I had to put down this book a few times, circle around it, then pick it put to see what it felt like in the morning. But Fitch has a way of pulling you in with an expertly woven web of atmosphere and ennui. Josie's world isn't necessarily one we'd all identify with – she's one of the hardest drinking and drugging women I've met in fiction in a long while – but it's riveting nonetheless.

Fitch's near-encyclopedic knowledge for pop (and punk) culture, fine art and music also works for me, too. I think the problems crop up, for me at least, when Fitch transfers too much of this knowledge to Josie. Still, I can forgive it, especially when she gives us prose styled like this:

‘Out the kitchen door, she stood breathing in the night air, the cold and the rain, the chairs dripping against the warped wood of the deck, the lights muted and hazy. There was no end to the Bosch. She raised the voddy to her lips, spilled most of it down her chin. Served her right for having a good day, she had gone almost a whole afternoon without thinking of him every moment. Thinking she was doing well, making progress. There was never going to be an end to this. Whenever she thought she could not feel more alone, the universe peeled back another layer of darkness.

But there it is. Happy reading