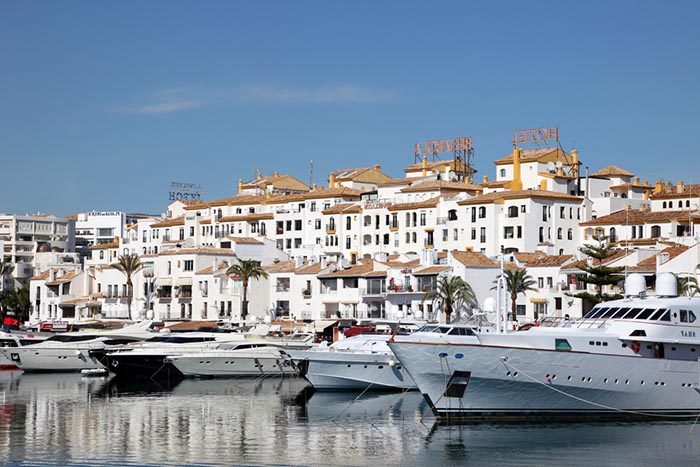 On a whim (literally), we booked a long weekend break (4 days) to Puerto Banus in Marbella, Spain.

After booking a flight with Ryan Air which on the surface seems inexpensive but in reality is not (handling, luggage, and taxes) works out the same as other UK carriers (and includes terrible service).

During the 1970s and 80s, Puerta Banus, Marbella was a playground for the rich and famous – this has changed now, and it is more frequented by well-heeled vacationers from all over Europe and Russia. It lacks the romanticism, and the architecture of the Cote d'Azur, Saint Tropez and other similar European destinations – the marina on Puerto Banus moors boats and super Yachts owned by the world’s wealthiest individuals.

Strolling along the Marina Front line, you will find the usual cheap souvenir shops mixed in with high-end fashion boutiques such as Dolce & Gabbana, Gianfranco Ferre, Jimmy Choo, and Gucci.

El Cortes Ingles
Further back in Marbella itself there are plenty of shops and restaurants including the El Cortes Ingles, located on Ramón Areces, the department store boasts three large floors where almost everything can be purchased from clothing to household goods.

In recent years Marbella has been struck by the invasion of the chain restaurant, pushing out the smaller traditional Spanish cafes and restaurants to be replaced with MacDonald’s, Burger King, Jacks American Brasserie, Tony Roma’s and other similar fast-food chains. 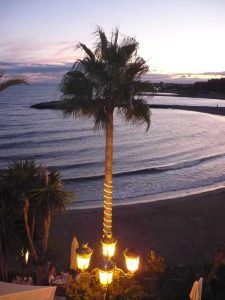 After a forty-minute taxi drive to Marbella (careful you do not leave your mobile phone in the taxi – you will not get it back), we arrived at the Park Plaza Suites Hotel in Puerto Banus.

Shop around for off-season hotel prices

The Park Plaza ranks mid to expensive 160.00 to 250.00 per night (2008), there was ten of us split between two very large apartments with several rooms in each  The price was considerably lowered by a special deal that worked out for three nights at £160.00 each. As this was at the end of the season, we found it quite high in comparison to other hotels that were promoting better hotel accommodation deals.

Ask for a room with a view

Our apartment at the Plaza Suites in Marbella was clean and spacious. It included a large lounge and balcony, fully equipped kitchen, three bathrooms, and a bar (not fully stocked). If you are lucky enough to face the beach as my room did with it's the view of the bay with pristine sandy beaches and swaying palm trees.

Best prices for the Park Plaza in Puerto Banus

A friend of mine told me she made her reservation online and got a much better price at the same hotel here booking.com – Park Plaza

Eating out in Puerto Banus

I have only mentioned two places to eat in Marbella. However, there are many, and it's worth getting off the beaten path and down some back streets to find the best places to eat in Puerto Banus.

With a friend I decided to take a walk on the 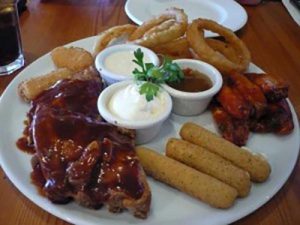 Puerto Banus marina and search for something to eat – we were a bit early as restaurants in Puerto Banus had not quite opened for dinner. However, we did manage to find an American chain restaurant (I know-I know – letting the sie down a little) Jacks American Brasserie located approx halfway down the Front Line of the Marina.

Any port in a storm

Jacks restaurant in Marbella serves typical American mainstream food, it's considered the poor man’s TGI Friday – it was alright and as they say – ‘any port in a storm’ – we found it better than TGI Friday's – at least the one located in Bournemouth – maybe a combination of being hungry and the weather being so good added to this belief.

We ordered randomly from the menu and had a plate of starters to share that consisted of onion rings, breaded cheese sticks, and ribs.

For our main course, we had a bowl of chilli, and I had the cheeseburger and to give credit where it's due it was reasonably decent.  The chilli was petty good too – and by all accounts, it did look quite authentic.

One of my favourite casual restaurants for dinner in Marbella is Marrush. Located on Av. de Julio Iglesias, they serve a fantastic selection of Lebanese dishes. SO much so that I have written a. full review here: Marrush restaurant review

Day at the beach 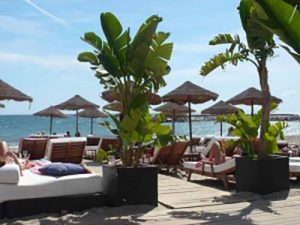 The following day breakfast was at Alexandro’s located directly around the corner from the Plaza suites – here you will get a good cappuccino and Eggs Benedict.

After we had sated our appetites, we headed for the beach, which is just a few steps from the front door of the Plaza Suites. Marbella is genuinely known for its pristine sandy beaches – and blue warm sea. We spent the whole day at the beach and rented a super large King-size rubber mattress that you can lounge on while staff serve you drinks.

As mentioned previously, Marbella is no longer the party capital of the rich and famous. However, Puerto Banus makes a good vacation spot, and I would recommend it for a short holiday or long weekend break. Nestled between mountains, it is beautiful, the sea and beaches make for a nice trip, the weather is predominately warm all year round except for a short sporadic rainy season, and the nightlife is worth checking out if you take the time to find the right places.

There is a fair amount of nightlife that includes pubs, clubs and bars and most dotted behind the main Puerto Banus harbour.

In the evening we had the VIP area booked at Club Tibu which boasts the largest outside terrace in Marbella. Unfortunately, Tibu is a bit of a blur in my memory banks. However, I do remember the music being an eclectic fusion of upbeat dance and chilled styled Ibiza circa the late ’90s.

Oh, look, no roof! – blame it on the Ballantine's scotch

We were seated at the far end of the nightclub. I am not sure if it was the warmth of the evening air or the 17-year-old bottle of Ballantine’s Scotch. I was busy consuming that I suddenly realized there was no roof. I was actually on the terrace; I was surrounded by walls that gave the appearance you are in a nightclub and looking up at a black ceiling – and just as your blaming it on the scotch you suddenly feel a faint evening breeze – pretty neat. There is plenty to see at the club ranging from Palm trees to fountains and lots of hideaway areas for privacy – recommended for an enjoyable evening out in Marbella.

This summer (2008), Spain has found it hard economically and has been visited by fewer tourists than in past years. The ones who are travelling to Marbella are spending less. Local business owners blame it on the credit crunch I think a combination of both the credit crunch and the high prices of Marbella has put many off from spending money on restaurants and bars that overcharge, A typical example of this is Pangaea Sky Lounge in Puerto Banus, it was empty. Besides, one couple, we were the only group of people there. The drinks were highly overpriced, and the staff seemed sullen (and in one case hostile) – it would not have been too bad if there was some energy to the venue. We soon left.

Marbella itself also has a high per cent of prostitution (our taxi driver pointed this out) with many of its girls coming from Russia, Eastern Europe and Brazil to work – apparently being legal in that part of Spain. Some nightclubs and bars cater to men and women looking for call girls and prostitutes in Marbella.

Parties and events in Puerto Banus 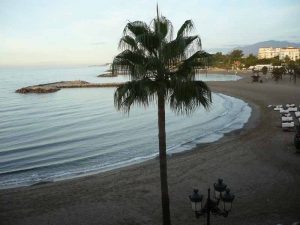 We were informed that Puerto Banus is a well-known destination for stag and hen parties, this was quite evident in the nightclubs, bars and beaches – it was a case of out-of-country and out-of-sight which gave full permission for a weekend of non-stop hedonism.

Blame it on the Romans

We saw a group of women riding a giant inflatable phallus on the waves – a group of guys on a stag weekend walked around with women’s high heels and thongs and were throwing-up outside in the entrance to Dolce & Gabbana, On Friday night there were many casualties from the UK and German booze cultures – the area had the same effect on the Romans – maybe it’s something in the water…