I love diaries. But it's difficult to say which I enjoy more 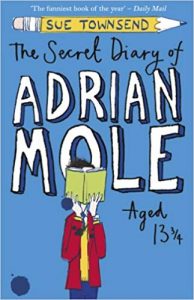 — writing them or reading them. I've kept a diary at least since my sophomore year of high school. While rereading it is always a trip, I think there's much more to be said for reading the most private and intimate thoughts of others.

For insight into her work and inner workings, I'd say Virginia Woolf is tops among published diarists. As far as fictional chronicles go, I confess I lapped up the Bridget Jones series. At the same time, I prize Doris Lessing's The Golden Notebook — which is essentially a writer's diary that embodies the creative writing process — as perhaps the most brilliant literary work I've read to date. (About time she won the Nobel.)

But somehow, one of the most fun made-up diaries eluded my readerly grasp — until recently. Turns out The Secret Diary of Adrian Mole Aged 13 3/4, by British author Sue Townsend, is one of the most amusing (as in laugh-out-loud, repeatedly) books I've read in a long while.

What is The Secret Diary of Adrian Mole Aged 13 3/4 about?

Adrian is pretentious, pimply, and prone to melodrama – and yet disarmingly sympathetic. His woes are familiar to anyone who's passed the age of 13, but with Townsend's gift for satire, you won't mind revisiting them in the least.

For example, Adrian's parents' marriage is imperilled by the insurance salesman who lives next door (Mr Lucas, whose wife leaves him for another woman). He's bullied at school. And the dog – who remains nameless throughout – topples the Christmas tree and then nearly bankrupts the Moles when it has to have surgery to remove a lump of coal, a plastic pirate and a fir tree that topped the Christmas cake.

Adrian believes he's turning into an intellectual…, and in love

What's worse, Adrian believes he's turning into an intellectual and launches into an unrequited correspondence with the BBC. Oh, and he's in love. Big spender that he is, Adrian chooses underarm deodorant for Pandora as a Christmas gift.

Two guy friends of mine cited Adrian as one of their favourite reads growing up – on par with The Catcher in the Rye. And Alexandra, head of book ordering at Olsson's Books & Records, recommended Adrian to me, pointing out that many of the scenes in it, such as the wedding between Prince Charles and Lady Diana, would qualify it as historical fiction.

I'll leave you with this short entry from Adrian's diary:

‘Sunday, January 17th.
I am reading The Black Prince, by Iris Murdoch. I can only understand one word in ten. It is now my ambition to actually enjoy one of her books. Then I will know I am above the common herd.'