I just love the title of this quiet masterpiece, A Far Cry From Kensington by Muriel Spark, originally published in 1988 and just reissued in a special cloth edition reprint from Virago Modern Classics.

The past cries out – literally and metaphorically – 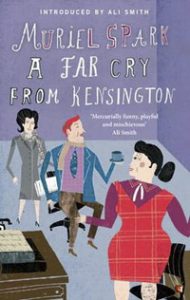 to Mrs Hawkins during the sleepless nights she spends reflecting on a period in her life when she worked in publishing and lived in a bedsit in what was, in the 1950s, a down-at-the-heels section of South Kensington in London.

Ah, how times have changed.

But for Mrs Hawkins (everyone, perhaps because she's a massively overweight war widow and easily confided in, refers to her as “Mrs Hawkins,” even though she's just 28) that period in her life is as sharp and coherent as if it had all unfolded yesterday.

One of the things I found so appealing about Mrs Hawkins (and the novel) is her brutal honesty, with others and with herself. She revisits and replays events from this period of her life until she's sure she's gotten to the truth of them – such as the piteous cry uttered from one of her fellow lodgers when she receives an anonymous letter – it's a cry that echoes in Mrs Hawkins' memory until it becomes a kind of refrain. Then there's the unexpected invitation to dine at the Ritz, which the still-too-plump Mrs Hawkins receives from an attractive man she meets by chance at church.

If you know Muriel Spark at all, you know that her narratives tend to kaleidoscope from splinters of incidents and scenes that seem unrelated and unordered into a sweeping panorama that offers a brilliant insight into character and psychology. A Far Cry from Kensington is no different in this regard.

It also offers a wry send-up of the London publishing scene with its debtors, eccentrics, high-maintenance authors and bottomless well of hangers-on. One particular hanger-on, called Hector Bartlett and ruthlessly laid bare by Spark, proves trouble not just for Mrs Hawkins, but for several others in this story.

Mrs Hawkins has the nerve to call him a ‘pisseur de copie' – a urinator of hack prose – directly to his face. What would be a coup de grace for integrity costs her more than one highly coveted job in publishing.

A character quirk has Mrs Hawkins constantly dispensing advice — to the increasingly deranged Polish seamstress, who lives in the flat below her, to another neighbour, young and naive and seeking that ever-elusive job in publishing, and to would-be authors. Here's just one small example:

‘Now it fell to me to give advice to many authors which in at least two cases bore fruit. So I will repeat it here, free of charge. It proved helpful to the type of writer who has some imagination and wants to write a novel but doesn't know how to start.'

To see Mrs Hawkins sage advice – and it's good, I promise you – you'll have to pick up your own copy of A Far Cry from Kensington. I bought mine in London, and as I far as I can tell, the cloth-covered Viragos aren't available in the States.

But you could keep your eye out for a second-hand copy and meanwhile check out one of Spark's more readily available works, including The Prime of Miss Jean Brodie, The Girls of Slender Means and Memento Mori.

I can highly recommend all of them.