‘Attend to me, girls. One's prime is the moment one was born for. Now that my prime has begun – Sandy, your attention is wandering. What have I been talking about?'

If that passage seems completely unfamiliar, then I envy you. 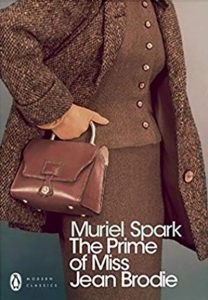 The Prime of Miss Jean Brody by Muriel Spark will be a wonderful discovery.

Spark, born in Edinburgh, Scotland, in 1918, is the author of some 40 works, including biography, plays, children's books and poetry. She published her most famous novel, The Prime of Miss Jean Brodie (from which the above excerpt is drawn), in 1961.

What is The Prime of Miss Jane Brody all about?

It's the story of five girls: Monica Douglas, famous for mathematics and her fury; Rose Stanley, famous for her sex appeal; Eunice Gardiner, famous for her gymnastic feats; Sandy Stranger, notorious for her piggy eyes but famous for her English vowels; and Mary Macgregor, “whose fame rested on her being a silent lump.” And, of course, their unconventional teacher, Miss Jean Brodie, a woman just entering her prime.

Miss Brodie (whom Spark based on Christina Kay, her teacher at Gillespie's High School for Girls in Edinburgh) is busy moulding the Brodie set into the creme de la creme of the Marcia Blaine School for Girls, all the time raising the hackles of her more staid colleagues who frequently doubt the benefits of a Brodie-style liberal education.

Eventually, one of the Brodie set betrays their revered doyenne, a point on which the plot pivots. But don't expect a linear narrative.

Spark ranks among the best stylists of modern literature. She is a master at what literary critics like to call “time montage.” In other words, time in the narrative does not move chronologically: e.g., first A happens, then B, then C. Rather time is splintered in this narrative, jumping from present to past to future, all in the space of a few pages.

But don't worry, the story is easy to follow, thanks to Spark's clever plotting and incisive characterization. But you learn that Brodie is betrayed almost as soon as you figure out all the members of her set. Still, the time montage works for Spark's novels, which deal so much in memory. Disorder on the page functions as an artistic rendering of the disjointed ways in which we look back on something significant: a betrayal or a bombing, for example.

Spark clears the nonsense and tells it how it is

In addition to her modernist mastery, Spark is also famous for biting wit and the distinctive tell-it-like-it-is quality of her prose. Critic Frank Kermode writes that “for Dame Muriel, one of the prime duties of the artist is to clear away as much as possible of the monstrous accumulation of stupidity in our world. Hence a certain ruthlessness of tone, a steady refusal to countenance failures of common sense.”

Like leanings are apparent in the character of Jean Brodie. Watch her in action in the classroom:

‘Hold up your books,' said Miss Brodie quite often that autumn, ‘prop them up in your hands, in case of intruders. If there are any intruders, we are doing our history lesson … our poetry … English grammar.'

The small girls held up their books with their eyes not on them, but on Miss Brodie.

‘That is incorrect. The answer is Giotto, he is my favourite.'

The Prime of Miss Jean Brodie (Harper Perennial) and The Girls of Slender Means (Norton) are my two favourites, but Spark has served up a smorgasbord of excellent works on which to feast. She wrote a biography of Mary Shelley, and some critics consider Memento Mori (Norton) – a story about an elderly set who each receive a mysterious telephone call stating “Remember, you must die.” – to be among her best work.

Spark, who was made Dame of the British Empire in 1993, continued writing to the very end. She published The Finishing School (Anchor) in 2003, to much acclaim in the U.K., but with a little less enthusiasm in the States. (I liked it.) Muriel Spark died on April 13th April 2006 (just this past year) at her home in Tuscany.