Seems like a long time since I've chatted up a British mystery… doesn't it? Well, Strong Poison, by Dorothy L. Sayers, is just the thing to put an end to the dry spell.

Strong Poison is the 1930 instalment in Sayers' series featuring the top-hatted sleuth Lord Peter Wimsey, who made his literary-detective debut in 1923 with the novel, Whose Body?

The Lord Wimsey series reminds me of a happy cross between 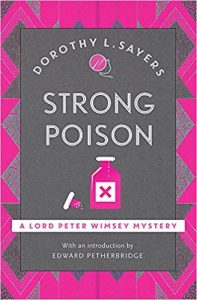 Agatha Christie and P.G. Wodehouse. She's a little more madcap than Christie, but Sayers' plotting still provides a striking period milieu that's perfect for Wimsey's seemingly harmless gang of spinsters (they work under the cover of a typing agency known informally as the “Cattery”) to wreak havoc with the wits of Wimsey's foes. If you're thinking of Miss Jane Marple or Miss Ariadne Oliver, you're right on target. And Wimsey's unflappable valet, Bunter, could stand up to Bertie Wooster's acid-tongued Jeeves any day.

Wimsey himself has a weakness for cricket and antiquarian books; and in this episode, we're set to wonder whether he'll save the popular writer Harriet Vane, accused of poisoning her not-so-popular writer-boyfriend, from the gallows. But I probably don't need to tell you that the conclusion here is foregone, as Vane becomes the principle sleuth in later crime dramas.

What's more, Sayers is said to have based the unhappy poisoning victim in Strong Poison, Philip Boyes, on the alleged father (the American writer John Cournos) of her (Sayers') love child. Not too difficult to see who Harriet Vane stands for.

Plus, there are loads of literary references — especially to detective fiction — and frequent allusions to all the absurdities found in good crime stories. For example:

‘Could it be in a book, do you think?'
‘A book! Why, of course, it might. How silly of us not to think of that! In detective stories, wills are always hidden in books.'
‘More often than in real life,' thought Miss Climpson…

Strong Poison is just the antidote for any mystery ill.