Knee-deep in my research into the life of Agatha Christie, I discovered that high among the list of authors she most admired was Wilkie Collins. I had never read him, but if Agatha saw something in him, I figured I might, too.

I decided to give him a go with The Moonstone, published in 1868. 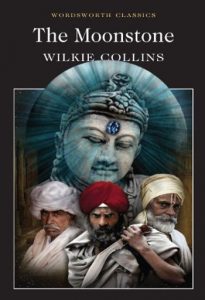 In short, it's a very long tale about a precious gem stolen from the brow of a Hindu deity that wreaks havoc on the Herncastles, an English family related to the man who may or may not have been the gem's original Western thief.

All human foibles are fair game

I admit to feeling daunted by the tiny print and endless page count. But let me say this book has been well worth the eyestrain. First off, Collins has a wicked sense of humour. He manages to sustain a satirical pitch that takes you by surprise and is guaranteed to make you laugh. All human foibles are fair game: xenophobia, religious fanaticism, the idle rich and even the Yorkshire accent find themselves at the end of Collins's skewer.

Second, and perhaps most enjoyable for me, was that I could totally see Collins's influence on Agatha Christie. Sergeant Cuff, the superstar detective from London put on the case when the diamond goes missing at Rachel Verinder's birthday party, has all the logical invincibility of a Poirot and an ego to match.

Third, Collins has a startling gift for wholly inhabiting diverging narrative points of view. There's the insufferable Miss Clack, a spinster whose mission, much to the annoyance of her fellow characters, is to save the unrepentant English soul. She's constantly planting religious tracts where they're not wanted and busy-bodying about with The Mothers' Small Pants Conversion Committee.

And there's Gabriel Betteredge, the Verinders' faithful servant and shrewd observer of human nature. To give you a taste:

“While I was being ordered about in this way, I looked at the great Cuff. The great Cuff, on his side, looked at Superintendent Seegrave in that quietly expecting way which I have already noticed. I can't affirm that he was on the watch for his brother-officer's speedy appearance in the character of an ass – I can only say that I strongly suspected it.”

As you can see, Betteredge is mightily impressed by Sergeant Cuff and catches a nasty strain of what he refers to as “detective fever” and pursues the case of the cursed gem with wit and alacrity.

There are many memorable others, too, who share their part in unravelling the mystery of the moonstone, but I'll leave them to you to discover.

All this is to show, of course, that people and things are rarely what they first seem to be. Change your perspective, and you'll likely get a very different picture. Agatha Christie took that theme and turned it into a legacy.